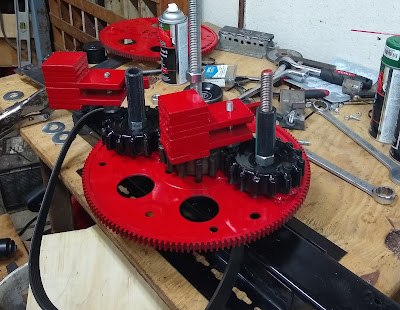 Two days ago, as I was finishing up for the day, I decided to put both new weights on a single flexplate assembly at the same time. I really did this as a way to see the action and make observations of any interference between them. I was pleasantly surprised when the interaction appeared to be complimentary in nature.

I was so pleased with the interaction that I decided to “spin” it up with the cordless drill. The amount of power being transmitted to the bench was remarkable, and because the flexplate was “balanced” out with the second planet assembly, I was able to run it at a somewhat higher speed without further modification.

I observed the weights each contacting a stop (one inner, one outer) at virtually the same time and producing complimentary pulses. I was so pleased that I immediately cobbled together a way to hold my phone and video this (the video is below and on YouTube).

Now I am getting ready to put the chain drive on it, although I am no longer sure it is necessary to have a positive non-slip drive. I am including some pictures of the jackshaft being made at a local home-garage machine shop. I didn’t have any keyways cut into it, but I can always take it back for that if necessary. The dimensions are ½” up to 17mm up to 1” and back down to 17mm.

Cost was negligible for this because I supplied the metal to a home machine shop (along with beer) on a Saturday. Normal cost for this at a local machine shop would have been around 35 to 45 USD according to a couple of calls made, but many machinists would do this on their lunch hour at work for about $20. 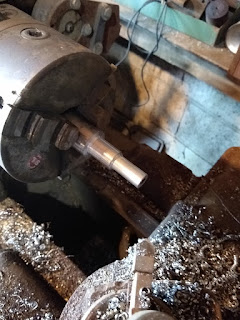 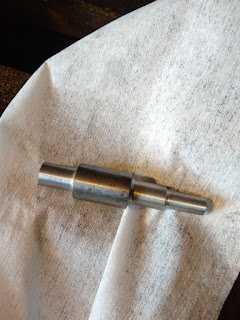 The plan is to weld a sprocket onto the 1” diameter section of the shaft, then bearings will be mounted on the 17mm sections and then the ½” diameter end will be used for the electric motor’s connection.

According to the surplus company I ordered the sprockets from, I should have them in about 3 days…