Skip to content
April 28, 2020 (To Chain or To Belt, That Is The Question)
Since identifying the need to eliminate the belt-slip/speed-variation problem and because I want two flexplate assemblies synchronized and both turning CW, either a roller chain or a toothed belt has to be used.
The dilemma was in deciding which would be better.
I really like roller chains because they are a very forgiving utilitarian design which will work in the harshest conditions, even if not perfectly tight or aligned. The downside is that they are heavy, noisy & require regular lubrication.
I like toothed belts (t-belts) because they eliminate the downsides of a roller chain, i.e. they are light, quiet and do not require lubrication. The t-belt downside is that they are rather “finicky”, they need to be well aligned, tight and clean.
After much consideration, I am installing a toothed timing belt for this prototype. If it proves to be too troublesome it will be replaced with roller chain & matching sprockets.
I have several used belts that were changed only for maintenance purposes and they have a rather common 8-M pitch, and I have some sprocket pullies for them, but the pullies would need extensive rework to fit my application. Because this is really a prototype, I decided to fabricate my own t-belt sprocket teeth on the existing flat pullies. This was pretty simple as the pulley circumference of 3” was almost perfect, & 1/8” rod is a nearly perfect fit to use as teeth for the sprockets.
I used a piece of timing belt as a guide and simply welded the teeth into place on each end. 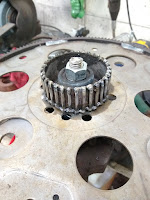 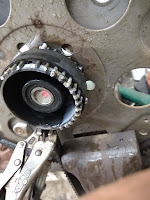 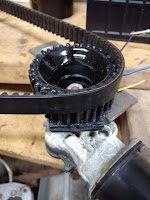 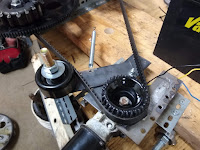 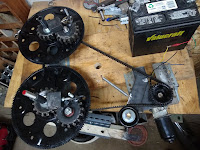 Alignment of the pullies is a bit challenging, but it works pretty well.
With slightly out-of -round sprocket pullies & without a truly solid framework, there is deflection in the axles & motor mounting that causes the belt to slack off and snap back tight, so I installed a belt tensioner on the slack side of the belt between the motor & load.
The T-belt works well, and now the rotational speed is MUCH steadier. This has completely eliminated the belt slippage I experienced previously which was caused by the intermittent torque load.
I purposely started this T-belt testing with the flexplates in sync so that it would put excessive pulsing strain on the motor drive, and it has proven to be capable of handling the pulsing variations in load quite successfully.
The better it works, the more mechanical faults become evident, that is why this slow progression is absolutely necessary. If I started out with a reactionless drive unit that functioned perfectly, how would I ever understand all the things that make it work, and the things that will stop it from working?
#3 on the To-Do List… Done… But now an additional To-Do…
The updated “To Do” list:
1- A better locking mechanism for the sun gears to the axles.
2- A way to vary the sun gear timing by adjusting axle position.
3- A different drive system from the motor to the plates, maybe a double-sided timing belt or a roller chain drive.
4- Explore the possibility of having sun & planet gears on both sides of the plates.
5- Mount in a motor vehicle for road testing.
6- Change synchronization of CW turning plates to reduce pulsation.
Here is a first test run video with the motor running on low speed and the unit not being allowed to move.