The revised outer stop (os2) seems to be the most effective, however, it should be noted that it also puts the heaviest strain on the gears. The strain tends to change the timing of the sun gear(s). I am thinking that I should fasten the sun gear(s) to the axle shafts and change the axle shaft mountings to enable “on the fly” timing adjustments.
I have also added the stop tab (which contacts os2) to one of the 1” square weights. The result was a dramatic improvement over the original trials with that weight and I also had to add an extra stop tab to the 1” square to keep it from “backfiring” or spinning itself around to the wrong side of os2.
This all showed me that the os2 is really absorbing a tremendous amount of torque from the weight, and as the timing of the sun, planet and weight are becoming much more critical it is also having a harder time maintaining adjustment.
Note: After multiple, successful tests the forward thrust would suddenly be very diminished. Sometimes it would seem like the whole thing had been a joke on me & I would get very discouraged.
This has been found to be the effect of the timing slowly slipping while test running. This illustrates the need for an improved locking mechanism for the sun gears, with an allowance for adjustment as needed. 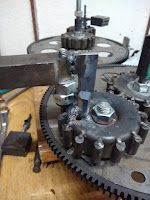 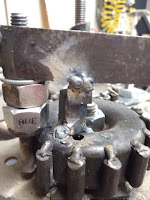 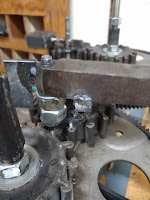 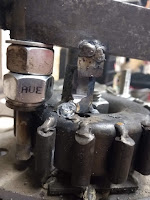