Skip to content
April 8, 2020
The outer weight stop is the device that stops the outer weight from swinging past the apex position of the planet gear. It stops the swing, absorbing the energy being imparted by the inertia of the weight, transferring that energy into forward motion and allowing the weight to stay at apex until it returns to the center of the sun gear and contacts the inner stop. The inner stop holds the weight until it is in position to be swung outward/forward where it contacts the outer stop again.
This illustrates how important the stops are and it begins to illustrate the stress imparted upon the gear teeth and the locks that keep the sun gears timed properly.
The outer stop seems to be where a large part of the stress is, so that is where I am concentrating my refinement efforts.
I have now tried several stops, and the 2 most successful will be called os1 and os2. Os1 is fastened directly to the planet gear and extends outward toward the weight where id stops the swing by contacting the weight’s connecting rod. Os2 is fastened to the planet gear but is inboard of the weight’s pivot. Os2 requires an extension coming from the inboard side of the weight’s pivot which contacts the stop. Intuitively, this seems to be a better idea. We shall see.
April 9, 2020
The outer stop version 2 (os2) seems to be much improved over os1 and I have changed 2 planet gears to utilize this improved design.
One of the (hopefully) benefits of this design is a change in the timing which directs much more of the generated force toward the forward direction. So much so, that I “might” be able to eliminate the counter rotating assembly. If I can, this will greatly improve efficiency!! I am hopeful. 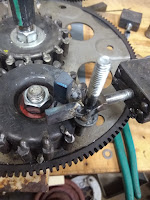 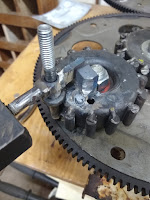 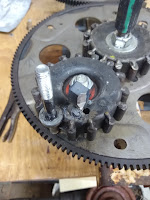